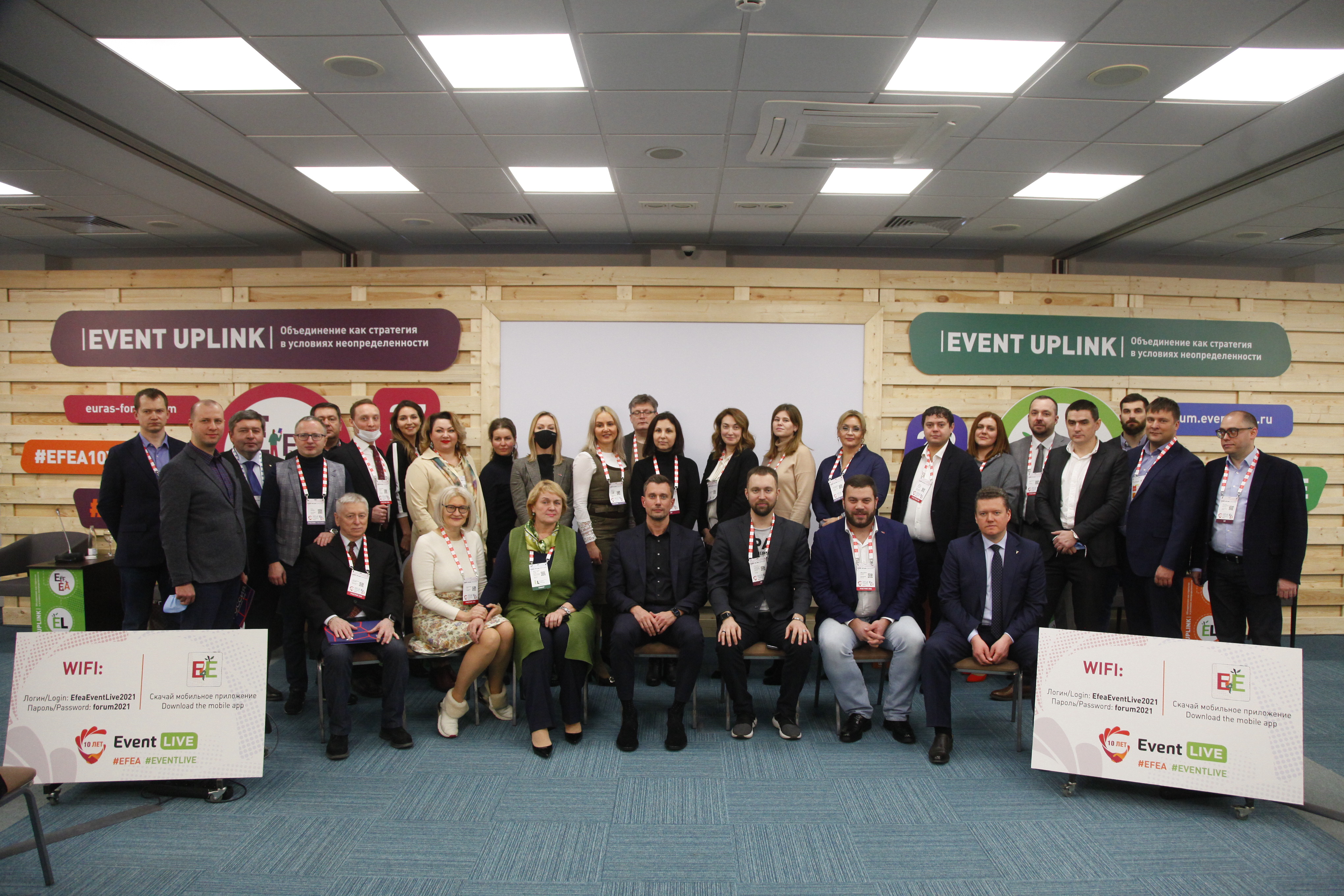 The Russian Convention Bureau summed up the results of 2020 activities

At the site of the EFEA’s X Anniversary Eurasian Event Forum in St. Petersburg, a General Meeting of members of the Russian Convention Bureau was held, where the results of the Bureau's work in 2020 were summed up. The meeting participants were presented with the main indicators based on the results of the Bureau's activities during the year, a report on the completed projects and the main areas of work for 2021.

One of the main goals of the Bureau's activities in 2020 was to draw attention to the current problems faced by the industry and to extend the support measures due to the epidemic situation to the convention and exhibition industry. Active interaction with other specialized associations and professional unions led to the formation of measures to support the event industry. As a result, the activity in organizing conferences and exhibitions was included in the list of the most affected industries in the country in the context of the spread of COVID-19.

As the director of the Russian Convention Bureau Alexey Kalachev noted in his speech: "First of all, I must say that the previous year was a stress and challenge for the entire event industry. A year of testing for stability and endurance, a year of current challenges and hopes for the future. The main lesson we have learned from the very beginning of the introduction of restrictions and cancellation / postponement of events is that we need to quickly unite within the industry and look for new solutions to support and further develop companies that, first of all, are members of the Russian Convention Bureau: to protect their interests and seek support from the state."

In accordance with the action plan of the Russian Convention Bureau and the objectives set by the collegial and supreme governing bodies, the Bureau achieved the following indicators in 2020:

• at the end of the year, 103 companies from 21 constituent entities of the Russian Federation are members of the RCB;

• In 2020, the Russian Convention Bureau signed agreements on strategic cooperation with 3 major industry associations: The National Union of the Hospitality Industry (NUHI), the Russian Union of the Travel Industry (RUTI) and the Agency for Technological Development;

• The RCB organized and conducted 9 of its own events, and also took part in 17 industry and general business events held online and offline in various regions of Russia and abroad;

Within the framework of the general meeting, the results of the main projects of the Russian Convention Bureau were summed up. The purpose of them was to highlight new opportunities and effective tools of work, as well as to maintain an atmosphere of unity and joint negotiation of the current troublesome situation in the industry. Among them, we can mention such projects as a series of online sessions "Spring Roll Call", the online lecture hall "Summer Academy of the RCB" and the First Event-storytelling "Visiting with the RCB".

In 2020, the Russian Convention Bureau continued to actively participate in the work of specialized international associations, including the marketing sector of the International Congress and Conference Association ICCA, and, together with the Investment Promotion Agency of the Sverdlovsk Region and the Development Corporation of the Krasnodar Territory, took part in the business program of the ITB Asia Exhibition to be held online.

As to the plans for 2021, taking into account the current restrictions and prospects for the recovery of the industry, a vector was determined for further unification and joint work within the Association, including such directions, as proposing initiatives for the development of the congress market, supporting the creation of structures in the regions to perform the functions of a congress bureau, implementation of educational projects for representatives of the event industry, scaling the marketing strategy for the development of regions, developing an ambassador program and a project to cre ate " Event passports of the regions."

In his address to industry representatives, Alexander Stuglev, Chairman of the Board of the Russian Convention Bureau, Chairman of the Board, and Director of the Roscongress Foundation, noted the positive impact of the industry association and the joint search for new opportunities to overcome the difficult situation and further development. He stressed that such a result of the work of the professional community as the inclusion of event industry companies in the list of strategic enterprises is not only a sign of high confidence on the part of the state, but also recognition of the importance of the entire industry for the country's economy. Separately, in his speech, Alexander Stuglev noted the issue of restoring the possibility of holding business, congress and exhibition events, which will become possible thanks to mass vaccination and, as a result, the development of herd immunity. He also emphasized the importance of initiatives on the part of industry participants for its development and confirmed the readiness of the Bureau to support these initiatives.

Also at the site of the EFEA’s X Eurasian Event Forum the already traditional Third Intellectual Games of the Russian Convention Bureau took place. Teams of representatives of companies - members of the Russian Convention Bureau and participants of the EFEA Forum fought for the title of the intellectual leader of the industry. The topics of the questions were the unique features of the regions - RCB partners and the meeting industry. Intellectual partner of the games was Event LIVE - business portal for event industry professionals.

The conference center "PetroCongress" was the partner in organizing and conducting the General Meeting of the Russian Convention Bureau.