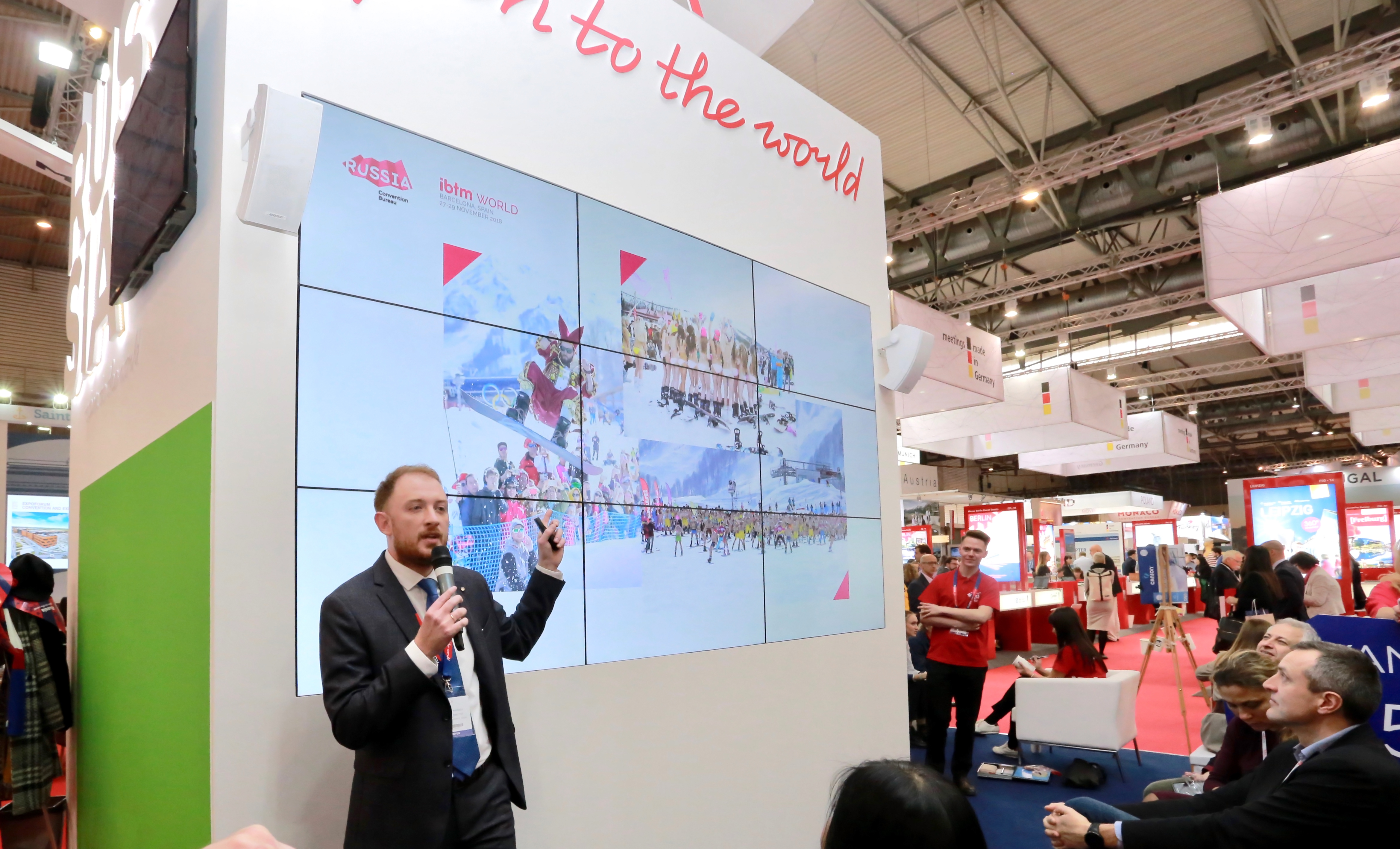 On November 27-29, 2018 the Fira Gran Via Complex in Barcelona (Spain) will hold a key event in the meetings industry - IBTM World-2018 international exhibition. According to the assessment by organizer, Reed Travel Exhibitions, a total of more than 15000 professionals of the industry, representing 141 countries of the world will take part in the event.

This will be the second time Russia will present its joint exhibit RUSSIA OPEN TO THE WORLD, organized by the Russian Convention Bureau with informational support of Roscongress Foundation. Russia has already presented joint national exhibits at such major events as IBTM World 2017 in Barcelona, IMEX 2018 in Frankfurt, and IBTM China 2018 in Beijing.

“Pursuant to order of the President of the Russian Federation “On National Goals and Strategic Development Parameters of the Russian Federation Through 2024” in the sphere of international cooperation the Russian Convention Bureau is making its contribution to increasing the export of services. Promotion of the country's event industry potential on the world market will ensure effective indicators of non-commodity exports,” Anton Kobyakov, Adviser to the President of the Russian Federation, says. “At this stage, it is important to present Russia as the flagship of the event industry, capable not only of implementing projects at any level, but also of setting future trends and demonstrating openness in presenting opportunities offered by Russia’s constituent regions to foreign partners. This task is being implemented by the Russian Convention Bureau by organizing collective RUSSIA OPEN TO THE WORLD exhibits at key international professional venues, and shaping the unified platform for trust-based dialog between Russia’s constituent regions and the international audience.”

The work of the national exhibit at IBTM World in Barcelona will focus on promoting Russia’s brand as a favorable venue for events of any kind.

“Russia is ready to welcome large-scale international business and sports events, and manage these projects successfully. We have the universal event infrastructure in place for this purpose in various cities and towns in 85 Russian regions; there is a total of some 3500 venues in the country and more than 7500 professional meeting industry companies,” Aleksei Kalachev, Director of the Russian Convention Bureau, says. “Moreover, Russia has rich cultural and historical heritage, and remarkable natural and climatic characteristics. Russia is a country of contrasts, where traditions of many centuries merge together with scientific innovations, where we have many cultures and nationalities living together, and where ancient Russian cities stand next to modern megalopolises; all these factors make Russia an increasingly more popular destination. This unrivaled potential of resources makes it possible to create unforgettable events, and modern infrastructure allows to guarantee top-notch quality. It is very important for us to demonstrate our broad potential, show Russia from a new side so that our foreign partners would not hesitate one second and select Russia as a destination for their future events. This is one of the main reasons why Russia is presenting its joint exhibit at IBTM World.”

The RUSSIA OPEN TO THE WORLD joint exhibit organized by the Russian Convention Bureau, will bring together companies representing the professional market of the Republic of Tatarstan, Kaliningrad Region, Sverdlovsk Region, Krasnodar Krai, Moscow, St. Petersburg and Leningrad Region.

The Russian exposition will include active participants of previous editions of this event - Convention & Visitors Bureau of Sochi (Sochi), Ural Exhibition Center (Ekaterinburg), Baltma-Tour Company (Kaliningrad), Meet Russia Company, and other companies making their debut at RUSSIA OPEN TO THE WORLD joint exhibit. One of the new participants this year is Roza Khutor, the largest in Russia year-round alpine resort, which will present its 2019 programs to international partners. The City of Kazan Committee for Development of Tourism will present the new capabilities of the capital city of the Republic of Tatarstan and the entire region famous for its hospitality. Moscow and St. Petersburg will also be represented by new exhibitors: Ritz Carlton Moscow and the SPB City Group, which will demonstrate their tourism development opportunities to foreign event organizers.

The program of the national exhibit will include business meetings with international IBTM participants, presentations of event potential of Russian regions, and tasting sessions of traditional Russian delicacies and treats.

We are happy to invite participants and guests of IBTM World, representatives of mass media, and event organizers to visit the RUSSIA OPEN TO THE WORLD stand No. G50 at Fira Grand Via Exhibition Complex in Barcelona (Spain), on November 27-29, 2018.