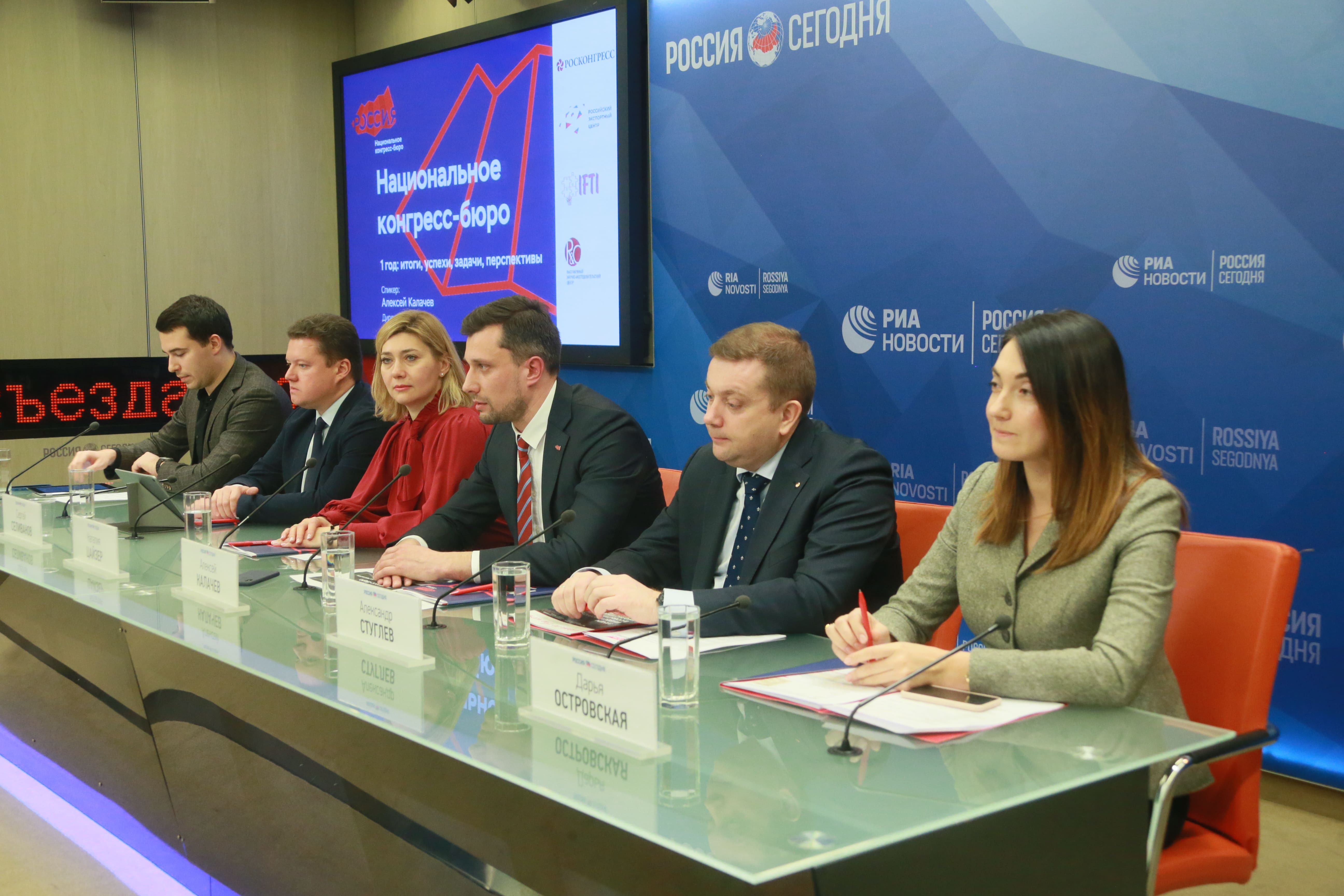 On December 11, 2018, the press center of Rossiya Segodnya IIA held the press conference of the Russian Convention Bureau (RCB), which presented the results of the year since the foundation of the organization. The participants of the press conference discussed the international events attracted to Russia with the support of the RCB and the expected economic effect from their implementation.

In its first year, the Russian Convention Bureau has already demonstrated excellent results. The RCB helped bring to Russia 4 major international events, with the total economic effect of these events totaling some RUB 5 billion, with the expected amount of tax payments at more than RUB 550 million. Nine more events are currently in the works. Since these events are expected to attract 16 700 people, the additional economic effect may exceed RUB 7 billion.

Alexander Stuglev, Chairman of the Board and Director of Roscongress Foundation, focused specifically on the significance of development of the event industry across Russia’s regions. He presented concrete examples of the impact various international events had on the development of infrastructure in various cities, such as Sochi, Vladivostok, Kazan, Ufa and Chelyabinsk, and also noted the importance of attracting and holding not only major events but also small-scale international industrial events and research conventions attended by 200+ people, because the infrastructure of each constituent region of the Russian Federation allows to hold these events at a very high level. “These events provide a significant impetus to development of infrastructure across the regions of the country and has a social effect as well: airports, railway stations, roads, landscaped areas, sport arenas, better hotel accommodations and other services constitute the heritage of these events for the local communities and helps improve their quality of life. Involvement of young people, creation of new jobs, development of small and medium business in the process of preparing for and holding the events, and then subsequent operation of these facilities also help create long-term positive social effects. As for the Russian Convention Bureau, in addition to international marketing, I see the need to develop a system of specialized education, as well as a system for assessment and quality management in the meetings industry. These are very important tasks," Alexander Stuglev said. “The Russian Convention Bureau is only a year old, but with 4 international projects already under its belt, the RCB shows the timeliness of its appearance on the market. It will help us use numerous opportunities constituent regions have to develop their role on the professional international market of the event industry.”

Natalya Tsaizer, Executive Secretary of the Russian National Committee of the World Energy Council, spoke on behalf of her organization. She noted the contribution that the cooperation between the RNC of the World Energy Council, the Russian Convention Bureau and the Roscongress Foundation made by attracting a major event like the World Energy Congress, to be held in St. Petersburg in 2022 (WEC-2022), and overall about the importance of the role that non-profit companies play in promoting interests of various sectors of the economy on the global agenda. Natalia Tsaizer focused on the importance of holding such major international events in current economic conditions and the international situation.

The press conference also focused on key achievements and report indicators of the RCB and the upcoming projects of the Russian Convention Bureau aimed at promoting the event potential of Russia’s constituent regions on the international market of business events. In his speech Alexey Kalachev, Director of the Russian Convention Bureau talked about the strategic goals for the RCB in the next five years. The share of Russia on the international event market must increase to 1.7% (currently less than 1%), Russia should climb higher in international ratings of the event industry and the contribution of the event industry to the GDP of the Russian Federation should increase thanks to attracted international business events.

The key industry development goals of the RCB include creation of regional convention bureaus, visa support for participants of business events and development of unified industry standards and creation of the material and technical base for the industry. A system of subventions must be developed to support the events and launch the ambassador program. These topics were covered by experts representing leading companies of the Russian event industry (Nikolai Fadeev, Director of Office Group, NPO Congress Bureau of the Republic of Bashkortostan, Svetlana Plieva, Head of Marketing Territories Section under the RCB Executive Committee, Director General of OOO MACO Congress Management, head of the Event Management Section under the RCB Executive Committee, and Igor Gorbachev, General Director of SynchroTel, head of the Services Section under the RCB Executive Committee).

The potential of Russia’s destinations for international events was also supported by Darya Ostrovskaya, member of the Board of the Russian Convention Bureau, General Director of the R&C Research and Exhibition Center. She presented the rating of event potential of Russia’s constituent regions, based on the data on infrastructural and other capabilities of Russia’s constituent regions. The success of a number of cities (including Ufa and Chelyabinsk) was noted separately as these cities improved their standing in the rating considerably as compared to the previous period.

The final discussion between the event speakers and media representatives focused on issues of importance for the industry, such as introducing quality standards in the event industry, improving education levels of event industry specialists, as well as the problem of involving industry and science events into the international agenda. The latter issue will be resolved in large measure by the initiative of the Russian Convention Bureau to develop regional passports that will be used to attract events in major industries to Russia’s regions; it will allow constituent regions to become flagships for concentrated efforts to attract events in the industries a particular region specializes in.

The results of the RCB's work in 2018 will be also presented at the Annual Meeting of Russian Convention Bureau members on January 16, 2019 at the 8th Eurasian Event Forum (EFEA) in St. Petersburg.

It must be said that RCB results have already been noted at the international level. For instance, Alexey Kalachev, Director of the Russian Convention Bureau, was included in the Top 10 most influential professionals in the event industry of Europe in 2018, according to Kongres Magazine, one of the reputable European publications of the event industry. Out of 730 candidates representing the European event industry, 60 European specialists were included in the short list of most influential specialists in the meetings industry of 2018. The contribution into the development of the region they represented over the year was assessed along one of six areas of activities. Aleksei Kalachev was included in the TOP 10 rating in the category “Territorial Marketing Organizations and Convention Bureaus.”